Today, I am going to show you my final Barbie house -all the others have been reviewed already, you can find them in ‘my collection.’ Please excuse the flooring, I normally photograph on wood flooring but today it was just so darn cold that I needed to sit by the heater.

Anyway, this house has been produced, with different colour variations, only ten thousand different times, so I’m not sure which variation I have. Judging by the picture of Barbie, and the wall decals, I’d say around 2007 or so? 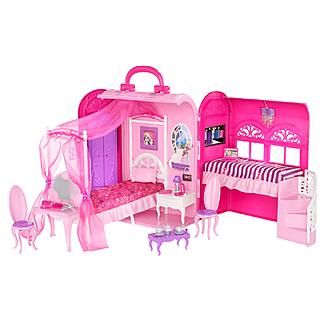 Most of all the variations have been bright pink, so I’m glad mine isn’t this garish. 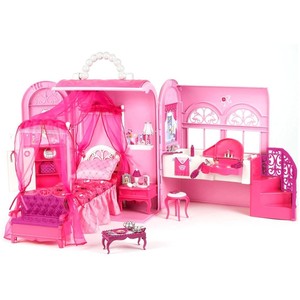 Ugh! So bright! It hurts my eyes! 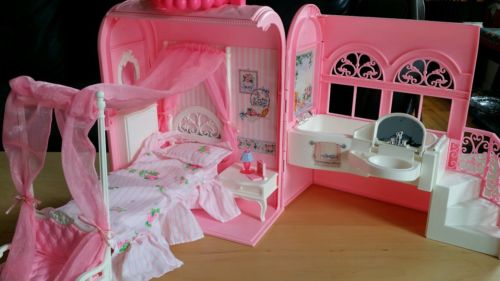 This one is probably the original -it’s from 1998. It really is hideous! 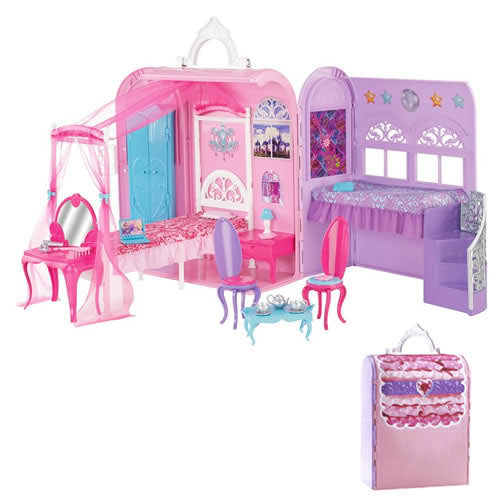 This one is from the 2012 film Barbie: The Princess and the Popstar. Note how it doesn’t come with a stool for the desk, but instead comes with two chairs for the tea tray (because you want to sit all the way up there when the table’s that tiny, right?). I like the vanity at the end, though. 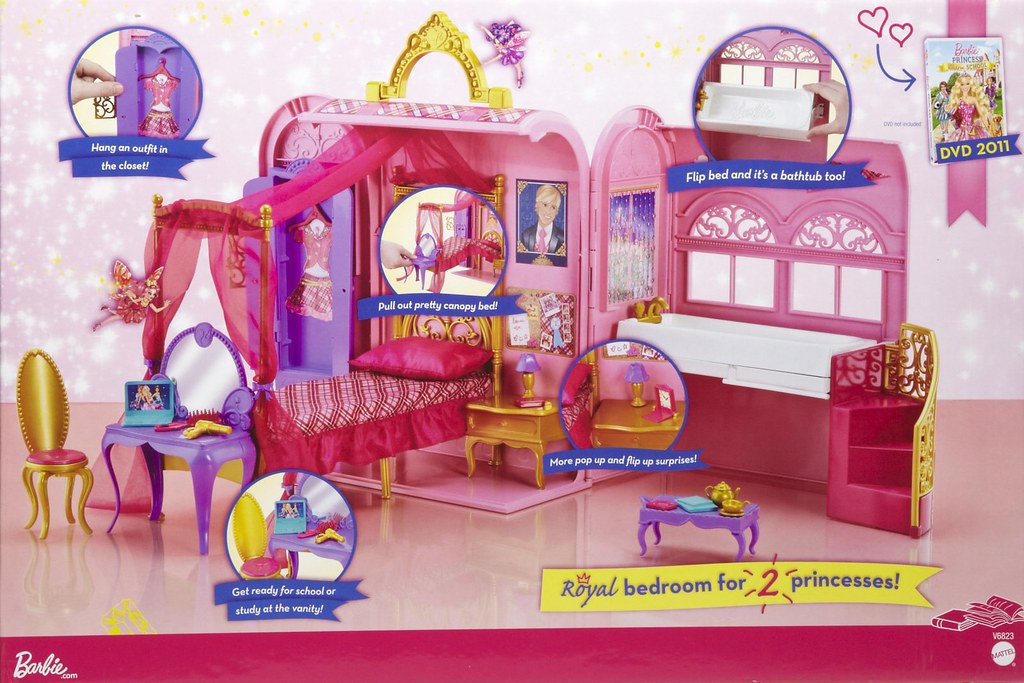 This final one is from the 2011 film Barbie: Princess Charm School. If I didn’t have the one I have, I would have liked to have this one.

–Vanity at the end of the bed

-Bath flips into a second bed (although it’s not long enough for a doll to lay down on, so it’s more of a couch)

-I like the elements of gold with the pink and purple

-A picture of Prince Nicholas is a bit weird (if you haven’t seen the film, he is the protagonist’s crush who she meets literally two times throughout the film, very briefly)

-No storage at the end of the bed

-The pink background is a bit too bright

Anyway, there are lots more variations but you can easily Google them if you want to see for yourself. I don’t really mind that this set has been recoloured so many times because frankly, it’s a really good setup! It’s nice that they’ve adjusted things.

So this is mine. 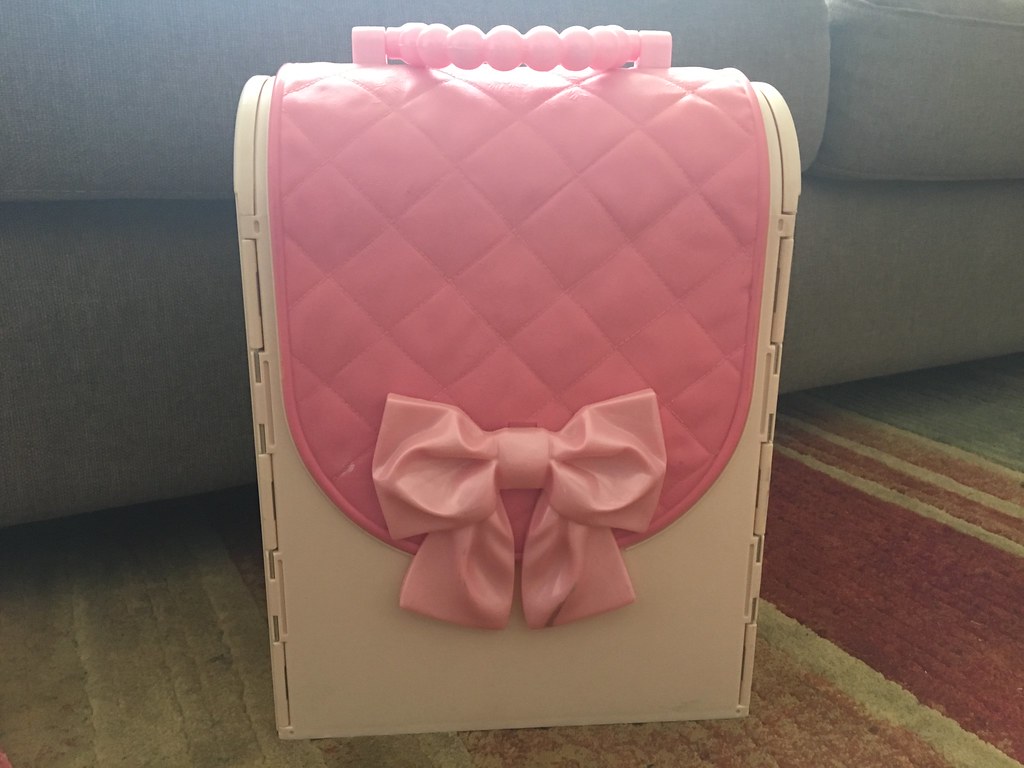 I love how it looks when it’s folded up. Not that I’m going to walk around the mall carrying a Barbie dollshouse, but it’s nice to know they made an effort to make it look nice. I think the whole ‘travel’ idea is such a good one -perfect if a child wanted to bring their Barbies with them to someone else’s house. 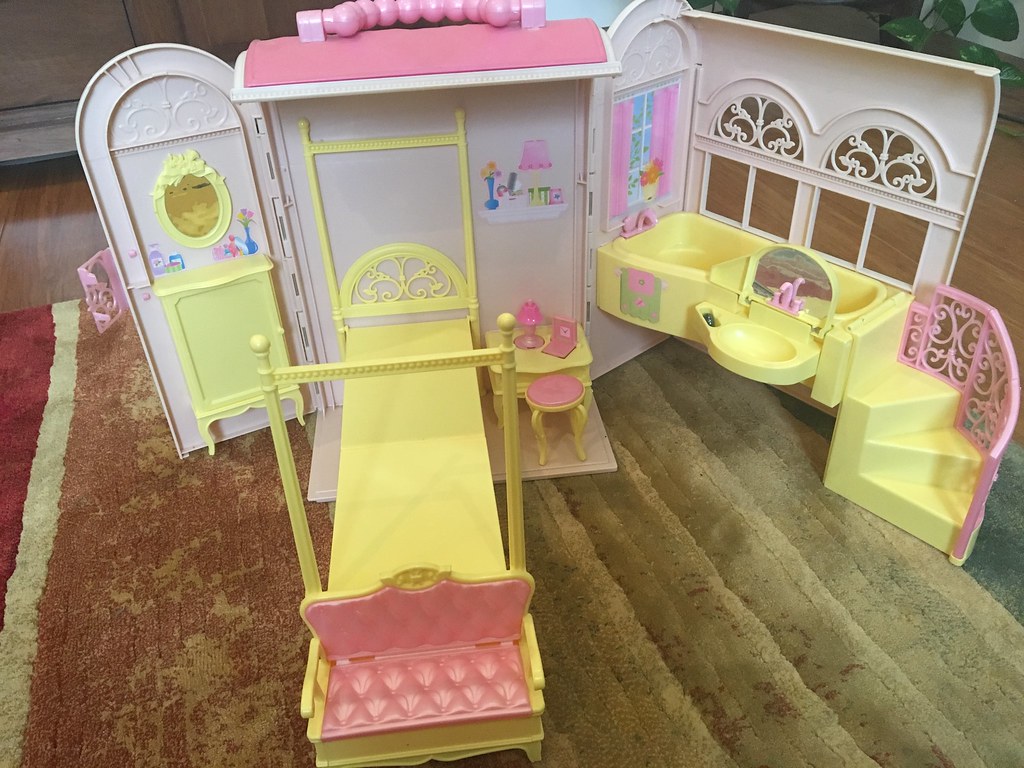 This is how it looks once it’s all opened. I use this house as Princess Courtney’s bedroom, Princess Aimee’s and Princess Holly’s. It just looks royal! For today, it will be Lady Royal Delancy’s dorm room. 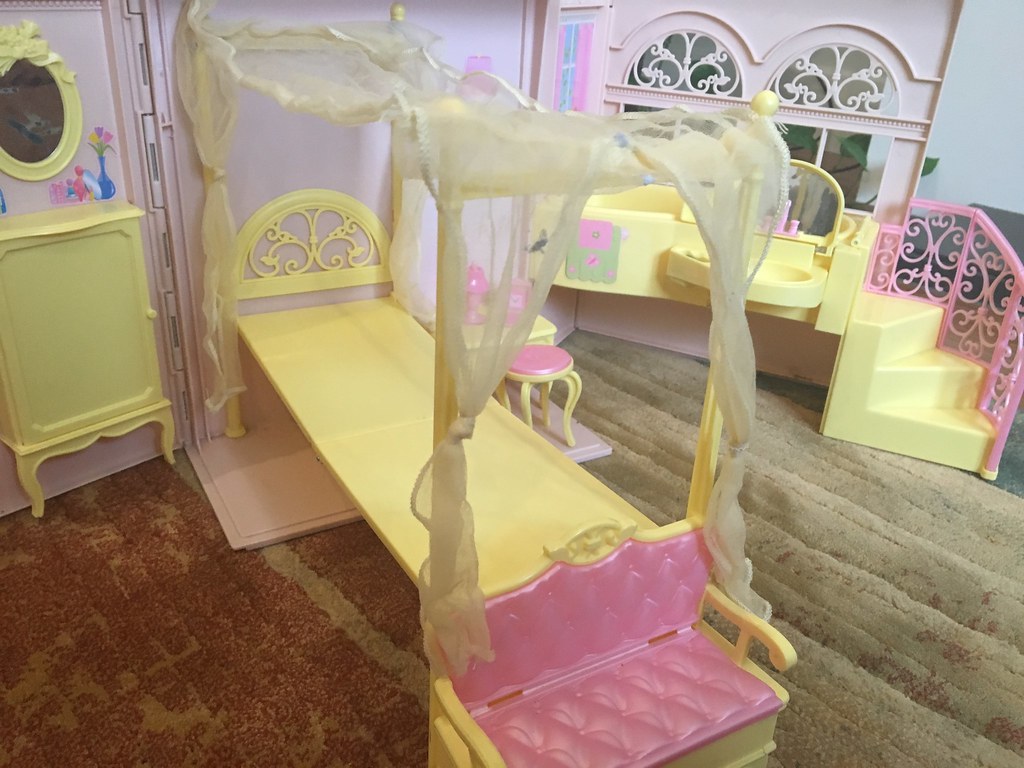 This is the gross piece of fabric that’s supposed to drape over the bed. Yuck. 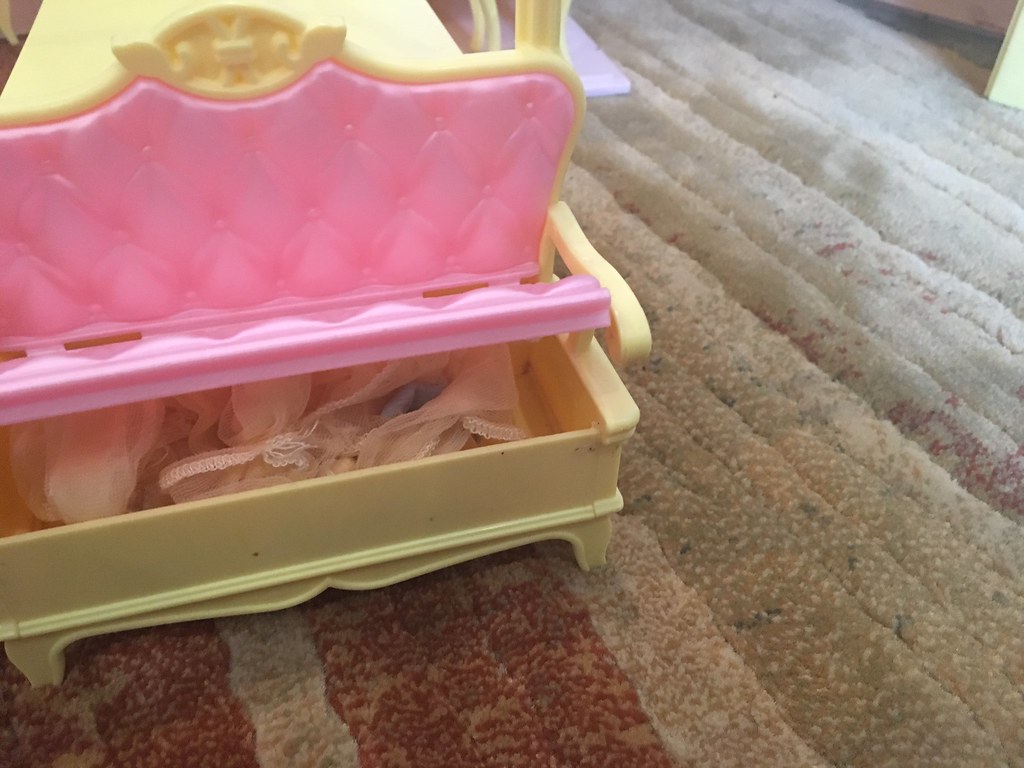 Let’s tuck it away in this couch here! I think storage is sooo important in these ‘travel’ playsets, it’s really important to be able to bring all your accessories with you. Once it’s all folded up, you can easily fit a doll and larger furniture pieces in the bathtub, too. 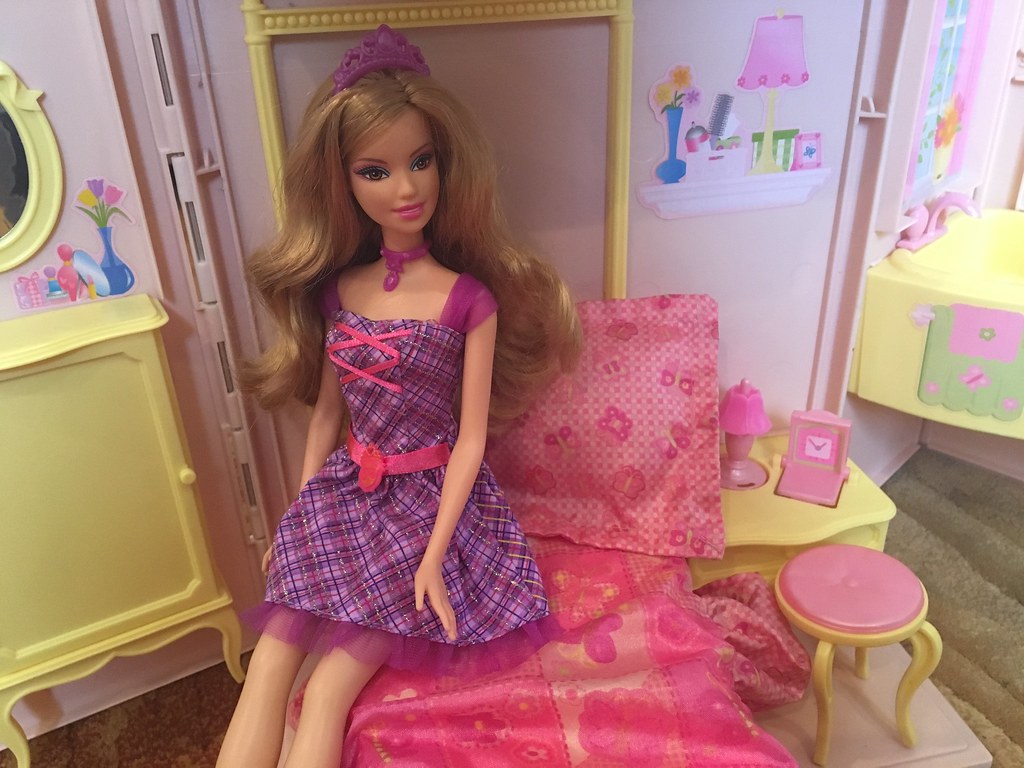 This is the blanket and pillow it comes with. They’re pretty nice, I like them. A good contrast to the yellow and pale pink of the rest of the playset. 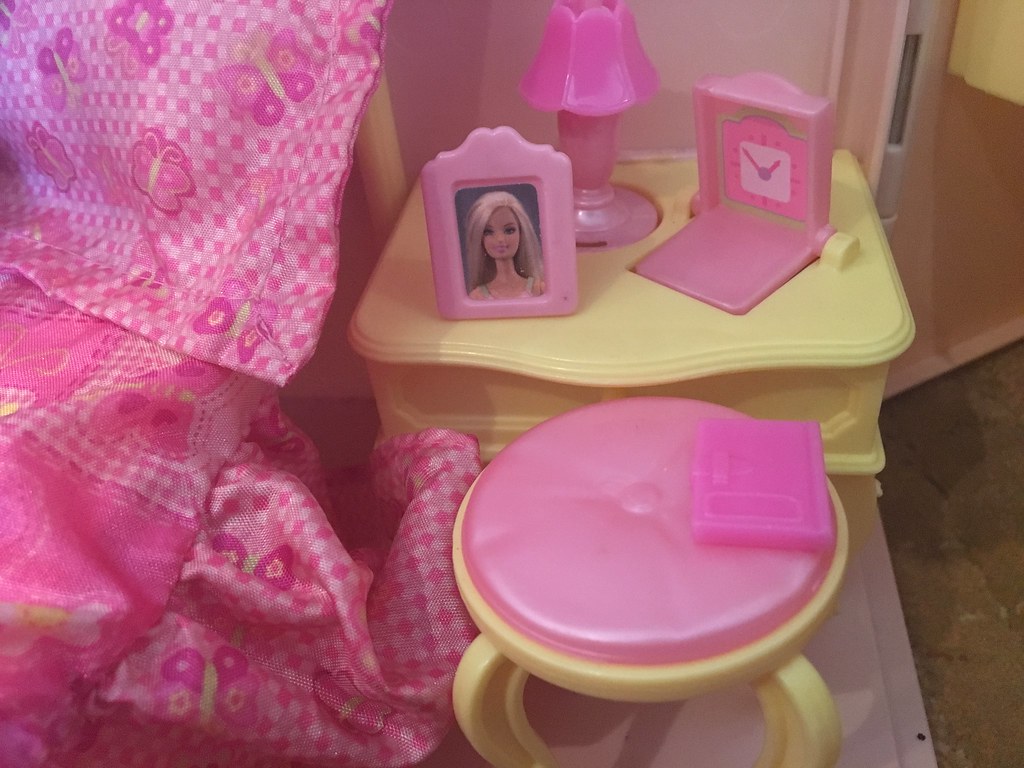 On the desk / sidetable here, we have a photo of Barbie (this is removable), a journal (removable), a lamp and a clock (which are both stuck to the table). The lamp and the clock have to be pushed down into the table in order to fold up the house properly. 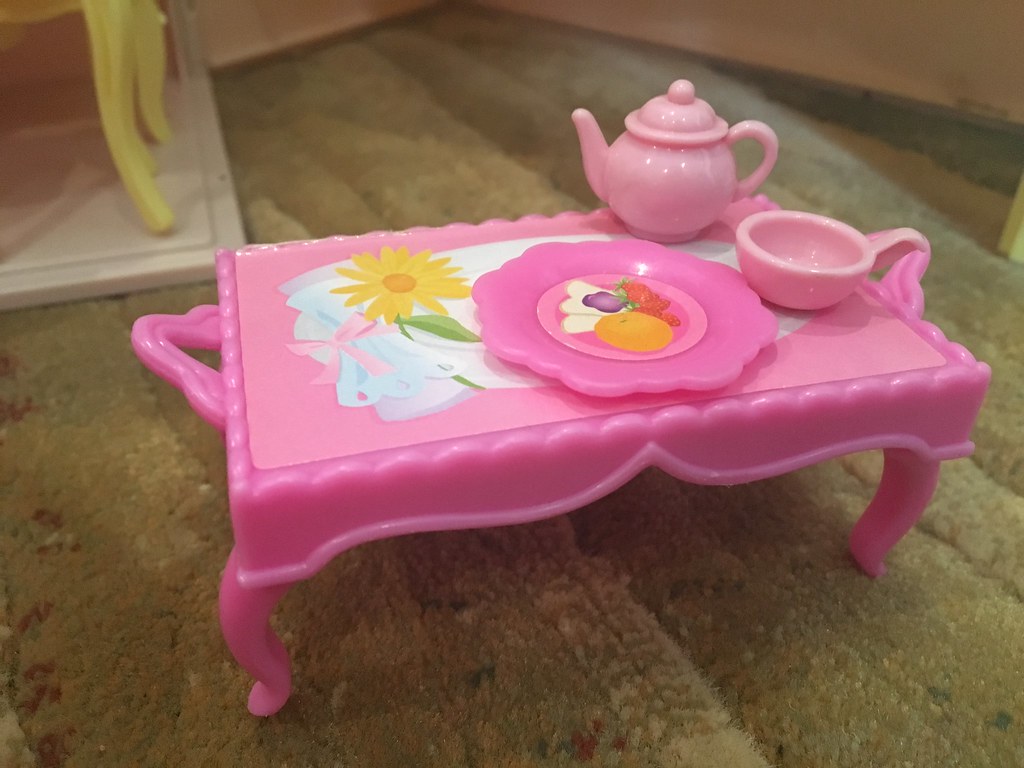 And here we have the tea table! How cute is the tea set and little platter of fruit? So royal and dainty! 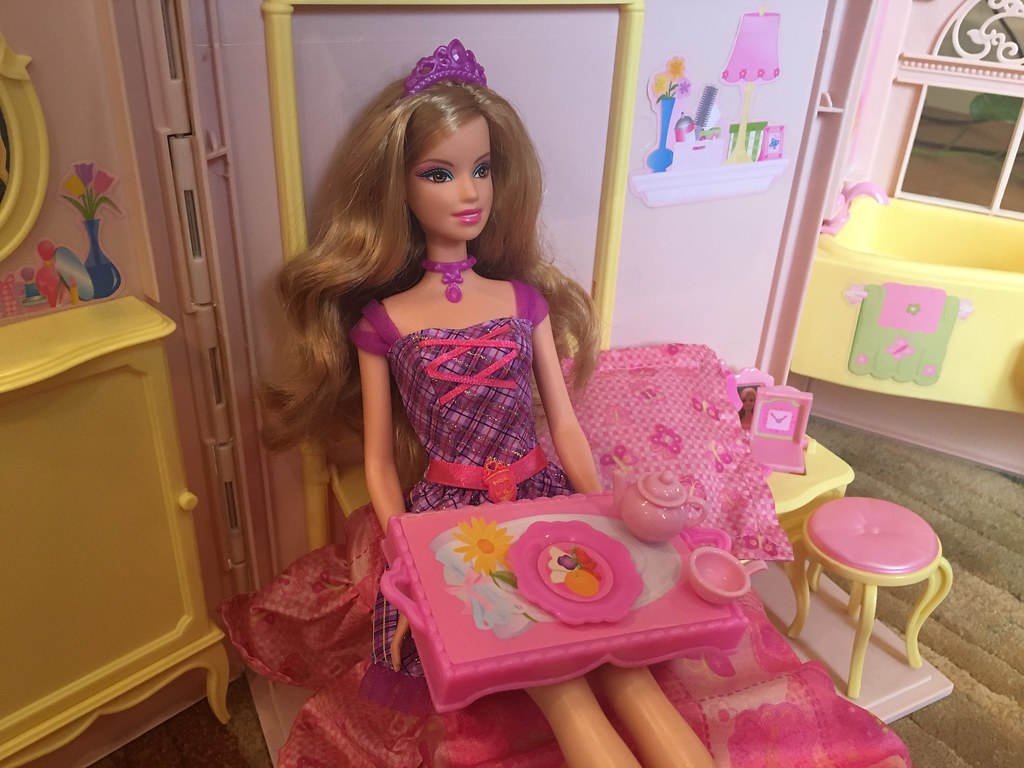 The legs can be bent down, so Delancy can eat on her bed. 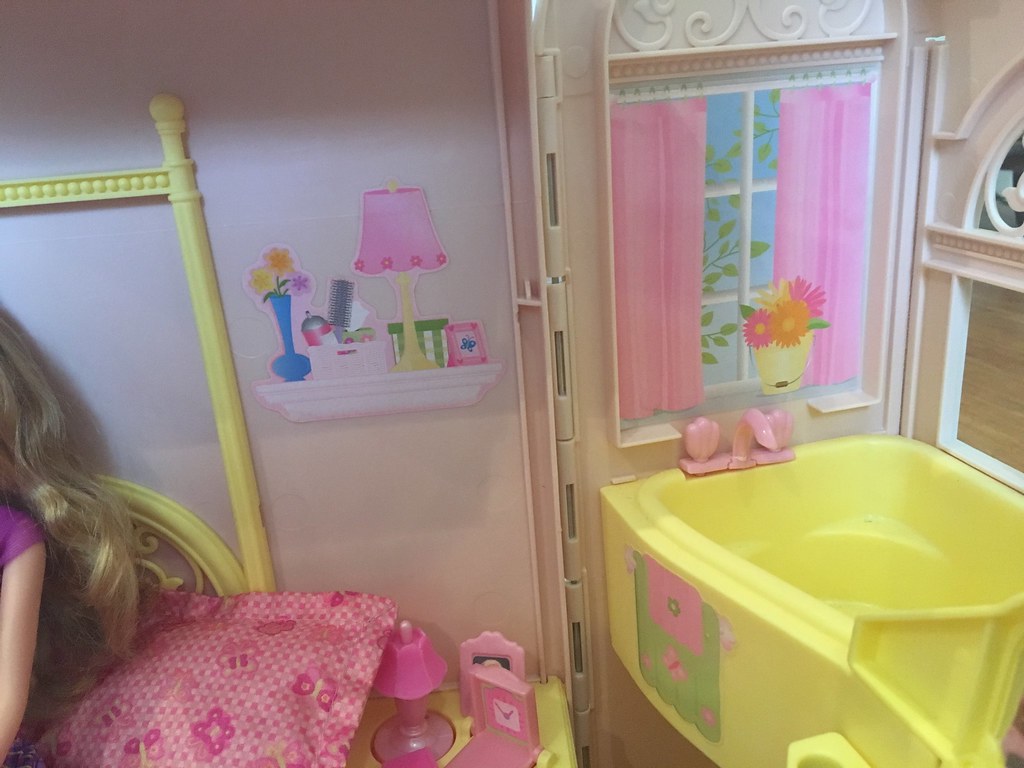 Let’s take a closer look at the wall decals. You can really tell the era of Barbie playset just by that! In 2005-2009, they featured heaps of flowers and butterflies, and really used a lot of these colours.

Oh -look at the details just above the window, engraved on the wall. How cute are the little swirls? 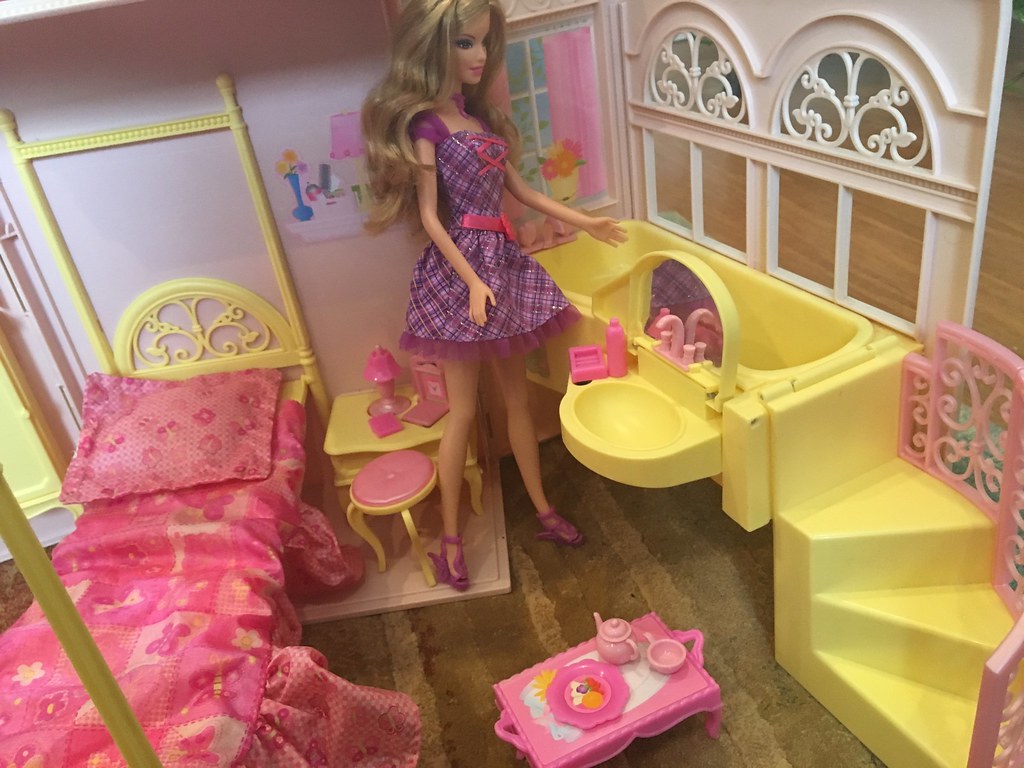 If you look on the sink, you’ll see a soap holder and a shampoo bottle. The soap holder used to have soap in it (it was so smooth and shiny!) but I must have sold that. I really like this bathroom area, especially the staircase. It’s such a lovely touch! 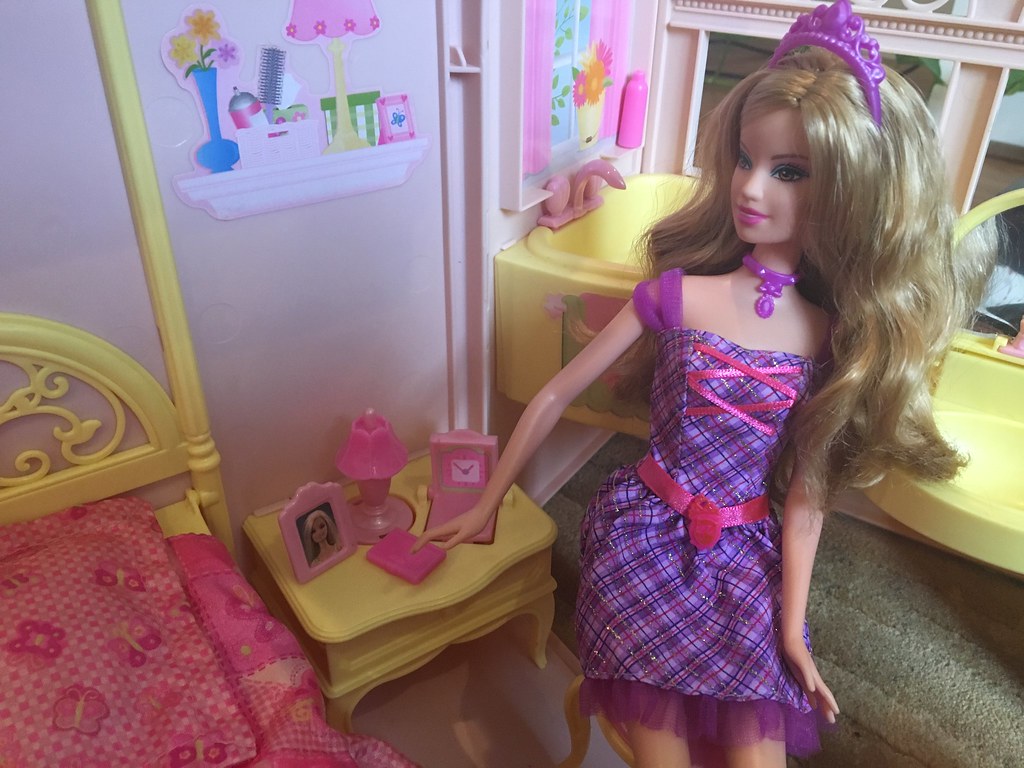 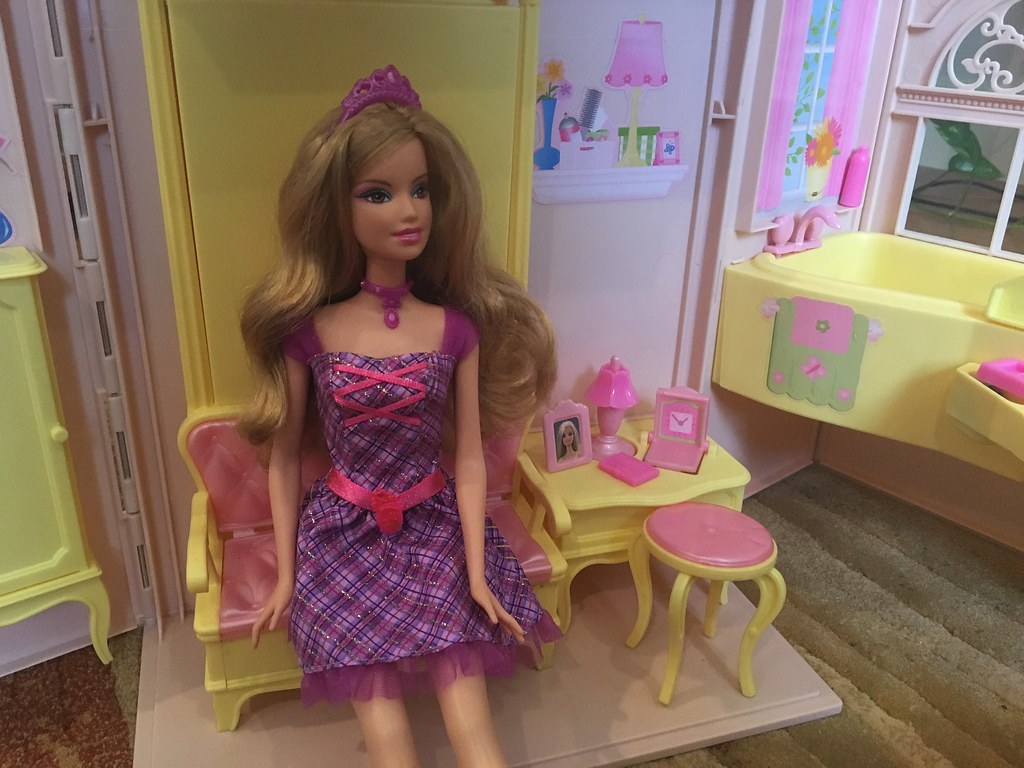 The bed can be folded up and you can use the playset just like this. Again, only dolls with articulated legs, or bend n snap legs, can sit on this couch. Dolls with stiff legs slide right off. 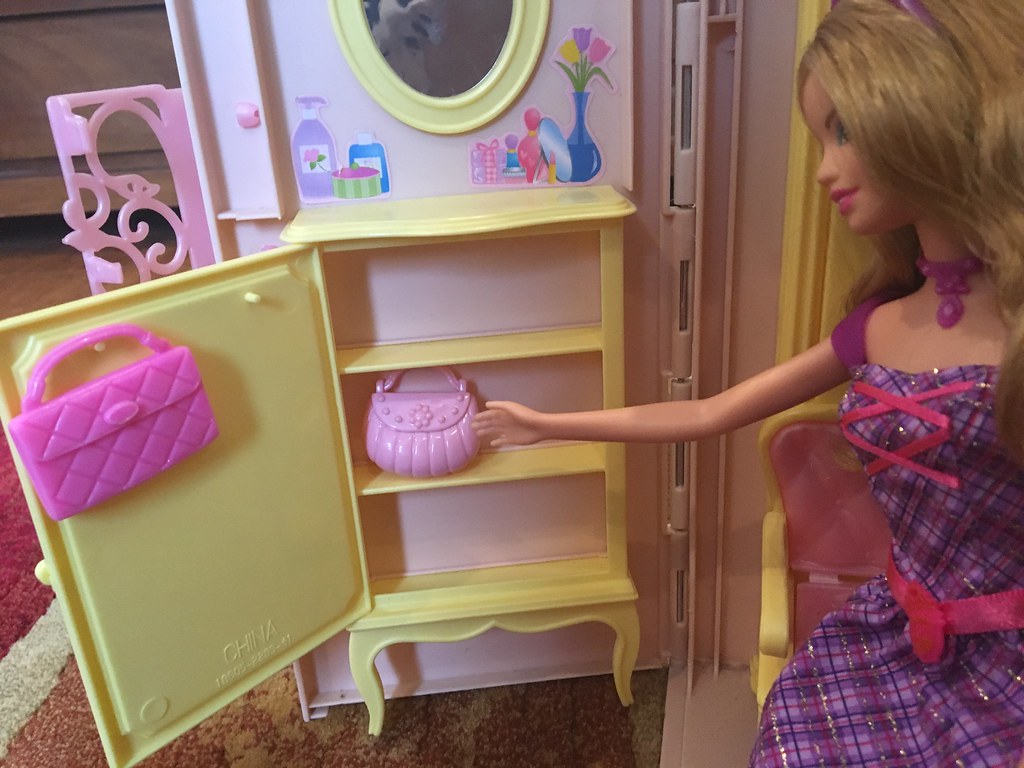 These are the two bags the playset came with. It might have come with a hairdrier as well, and perhaps a hairbrush, but I can’t remember.

The bags are pretty ugly and I don’t think I’ve ever used them. They can’t stay on the hooks very well and just make the cupboard difficult to close. If you put something on the cupboard shelf, I guarantee it will fall over within ten seconds. Useless, I say! That’s while a full-outfit cupboard like in the Princess Charm School one would have been nicer.

And that’s all! Overall, I really like this house! I think it’s perfect for everyday citizens of Aquifolia as well as royal princesses. I love all the swirly, princess-y pink details and the pattern used on the couch / stool. I love the tea set especially! The bags I could live without, though, and a cupboard improvement would be nice.

When I was a child (if my 2007 guess is correct, can you believe it’s been TEN YEARS since this was made??), the fact that this house only had a bedroom and bathroom never really bothered me. I guess it helped that I had a separate kitchen set though, haha!