Whohoo, we’ve finally got some solid info on Dreamhouse Adventures! I’m very excited! Today I thought I’d go over the trailer and just point out some things that I find interesting. You can view the trailer for yourself here (opens in new tab).

The trailer opens with a view of Barbie’s house. If I’m not mistaken, this is the first time we have seen this “version” of Barbie’s house, which changes every few years. Personally, I really like this design -I think it’s very modern and luxurious.

The palm trees in the distance signify that this series probably takes place in Malibu. It’s nice to know that Mattel is keeping things at least somewhat canon!

We are then greeted with this text. If you are familiar with the Polly Pocket franchise, perhaps you recognise the font and styling of the text? It’s not exactly the same, but as soon as I saw it, I thought ‘it’s just like Polly Pocket days!’

Here is the Polly Pocket logo, for your reference. 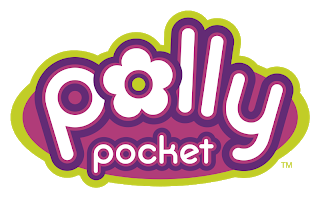 Personally, I found the text that continues popping up throughout the trailer to be quite annoying! The text had a weird transition that made my eyes hurt! It felt like it was slamming right onto the screen, and it was far too frequent.

We then see Barbie, looking the same as she does in her vlogs. However, there is a different background this time (although the general layout is the same, and she still has a telescope in the window). Personally, I much prefer this background as it looks more mature.

Here is the background in the vlogs for your reference. 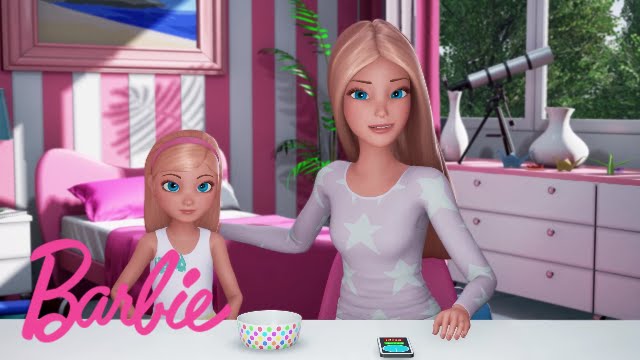 Which bedroom do you prefer?

Here it is for your reference. 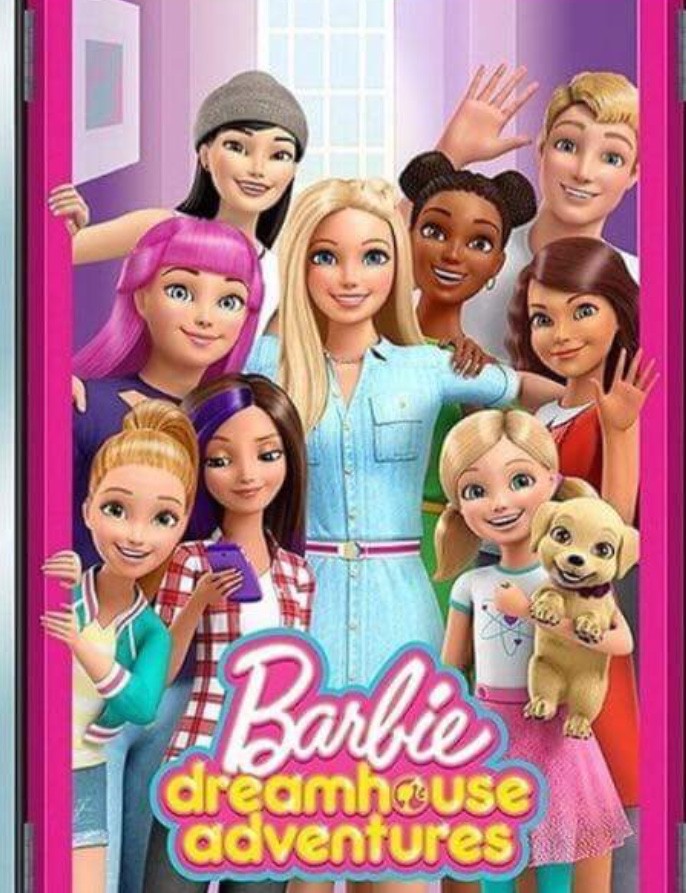 I’m glad we finally know more about the series! I can’t wait for it to begin.

Then we move over to the roof of Barbie’s house, the pool. This pool is vastly different from the pool in Life in the Dreamhouse (it’s about 10x smaller!) but I still think it’s very nice and luxurious.

This scene in particular reminds me of The Sims 4, the animation of the buildings is just so similar!

We are then introduced to two of Barbie’s friends, who I am assuming are Nikki and Teresa (however we have no confirmation on that yet).

Barbie and her friends then leave Skipper, Stacie and Chelsea behind to go on a road trip / adventure of some kind.

Ah, that pink camper! Such a classic Barbie item. 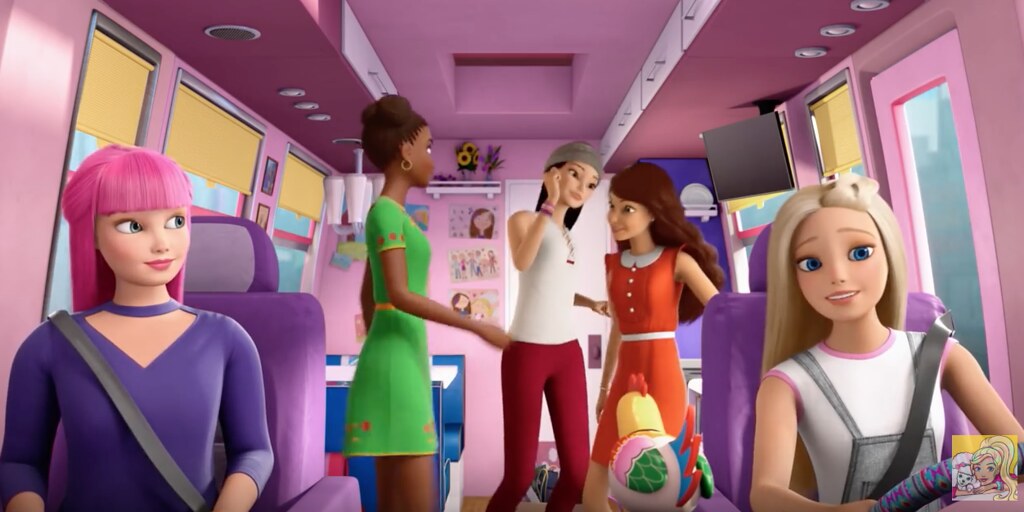 The girl with the black hair sounds completely different to Raquelle, so if it was Raquelle, surely they would find a voice actor that sounds at least somewhat similar to previous incarnations? Since their voices sound so different, I think it is not her.

The second new character is the girl with the pink hair. At first I thought it was Harper, as I mentioned, because “oh maybe Harper dyes her hair a lot,” but then I realised how different she looks in comparison to Barbie’s vlogs.

Here is an image of Harper for your reference. See how different she looks? 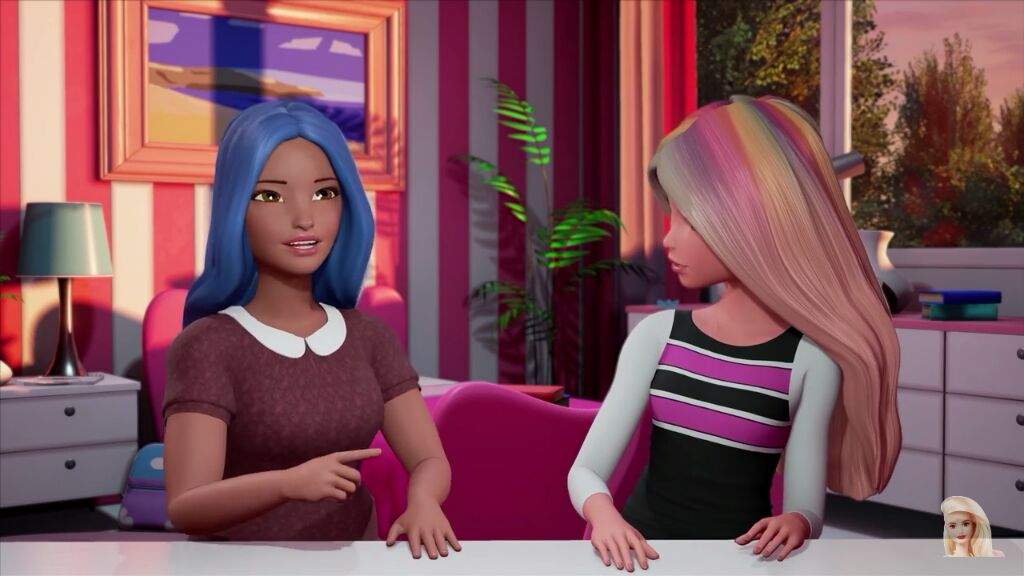 For the rest of this ‘initial thoughts,’ I will be referring to the pink-haired girl as Candy Behr, a character from The Sims 4. Candy is a DJ, just like the girl in this new series. 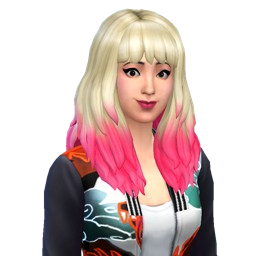 They look a little similar, too!

We then see a quick clip of Ken. This is the only shot of Ken, so I assume he does not have a big role in this series. Likewise, the girl with the black hair only appears a few times, so she must not be a big character, either.

I feel a little sad that Ken is not in this series as much, but at the same time, I feel happy that he was included at all. Perhaps Mattel is trying to “fade away” Ken to make Barbie appear more wholesome and appropriate for younger audiences?

We then see a quick dramatic scene between “Candy Behr” and Barbie. It looks like Barbie is saying “YOU CAN DO IT! JUST BELIEVE IN YOURSELF!” or something to that extent.

Ah, typical Barbie. Maybe “Candy” is nervous about DJing at a big event and Barbie has to encourage her?

We then skip back to Barbie with Stacie and Skipper. Barbie’s sisters appear quite a lot in this trailer, so I assume they must have a large role in the series.

I really like the design of this room, it’s very modern and stylish. I like the books under the platform and how the windows are so big, it’s nice to see Mattel getting a little creative!

And here we have Barbie doing an incredibly unrealistic skateboarding move…

The puppies! Since they were featured in the promotional image, I assumed we would see them somewhere.

I just hope they don’t talk!

And here we have “Nikki” (if that’s her name) sipping some lemonade by the pool. Take note of the cushions on the seat -aren’t they cute? I wasn’t liking the animation at first, but I’m enjoying all the little details. 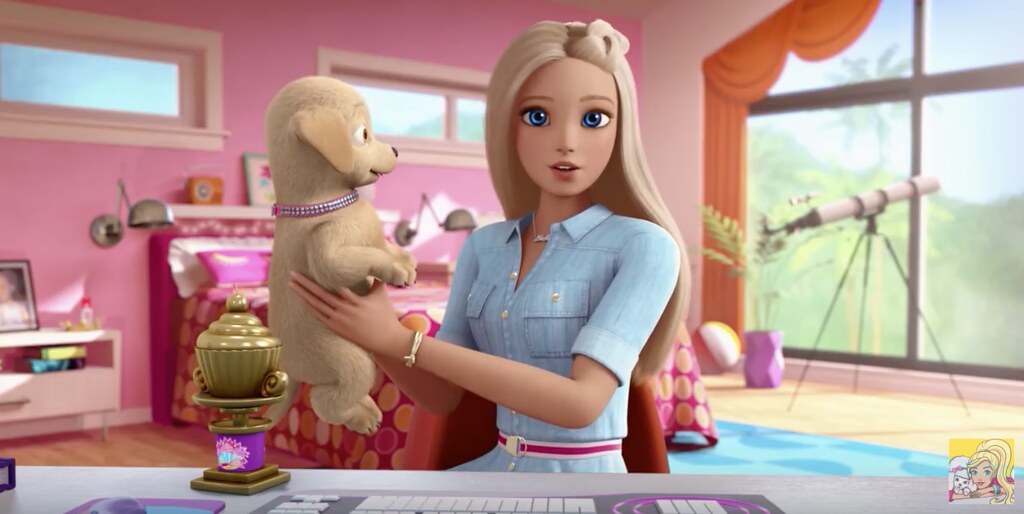 And back to the vlog! I wonder what is the significance of the cupcake trophy? And what was happening with the horse on the elevator? It all seems so mysterious!

Barbie is wearing the same outfit in the promotional image here. I believe this is also the outfit the really tanned Fashionista is wearing. 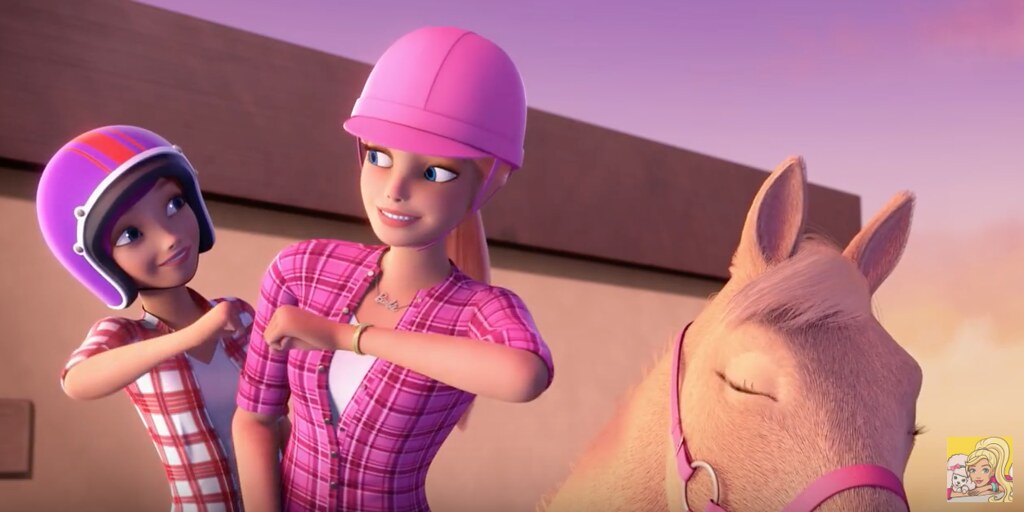 And finally, the trailer closes after a quick clip of Skipper and Barbie riding a horse. Don’t ask me why, I don’t know.

-I’m really glad we’re getting a new Barbie series! Especially if there’s not going to be any more films, I need something to get excited about. Seeing this trailer has really re-ignited my love for Barbie, and I’m really happy this is happening.

-I’m glad to see familiar objects such as the campervan. The campervan has been used so many different times, it’s a really nostalgic and nice to see it’s still being included.

-I really liked the song that was playing in the background, it’s a nice change from Anything is Possible that has been used as a general ‘theme song’ for the last few years. (Not that I don’t love Fifth Harmony! It’s just that it’s been used so often, especially the chorus)

-I liked how the trailer didn’t reveal everything -I love a few surprise! I’m really interested to know what is happening.

-In addition, I really liked the setup of Barbie’s house. Even though it really does look like The Sims, it’s still cute and well-designed! 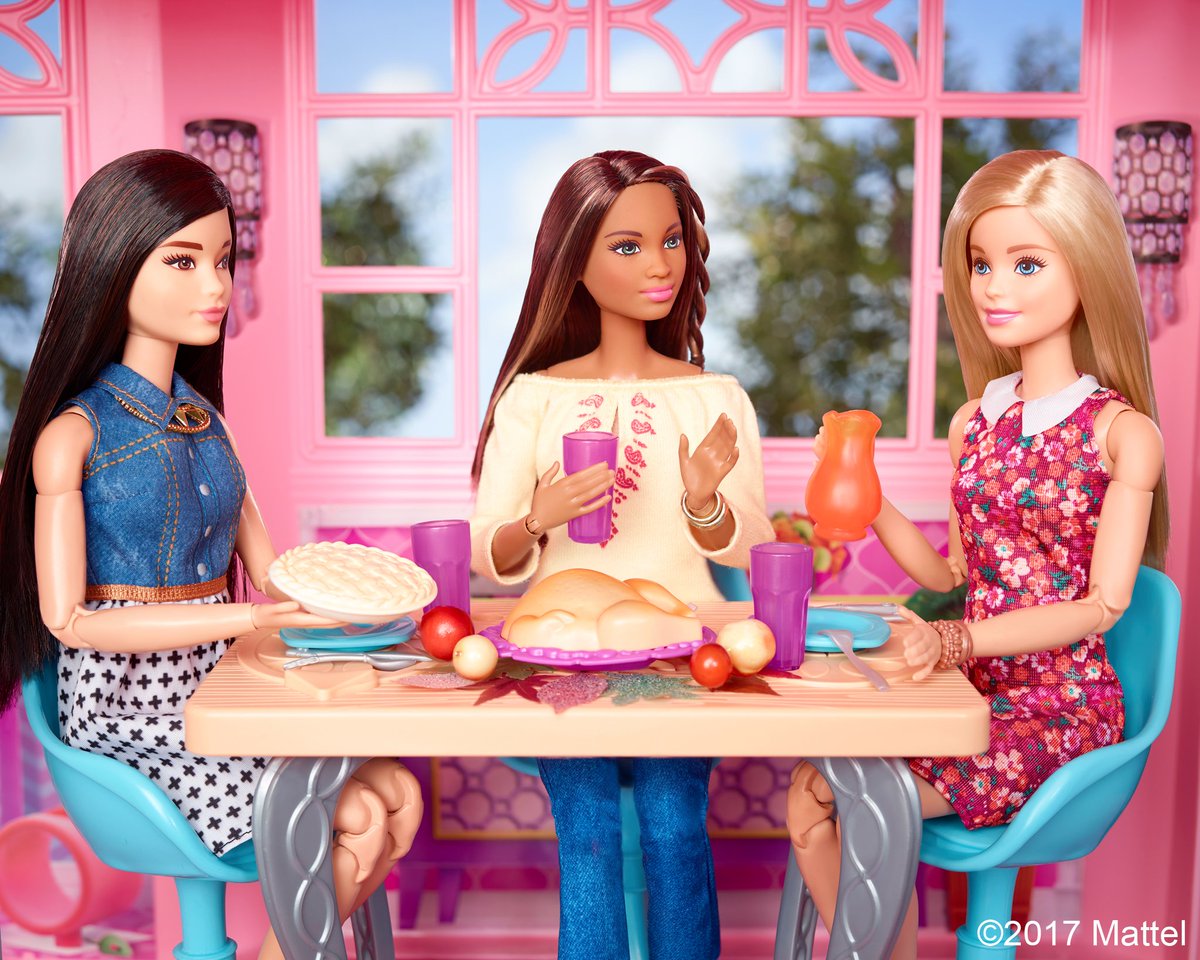 -The characters are wearing mostly the same outfits over and over again. For example, we mostly see Barbie wearing the pink jumper and the blue dress (although she does wear a riding shirt and bathers for those particular scenes). This worries me because I wonder “are there actually that many episodes? Do they take place over one or two days only? Or does Barbie just never get changed?”

–Personally, I find the talking puppies to be rather annoying and I wish they weren’t included.

-This series was originally scheduled for a 2017 release, then a March 2018 release, and now a May 2018 release. Why is it continuously being pushed back? Personally, I would rather wait longer and have a good-quality series, but still, I have to wonder. Perhaps the production team took on a different project in the meantime and this one had to take a backseat. 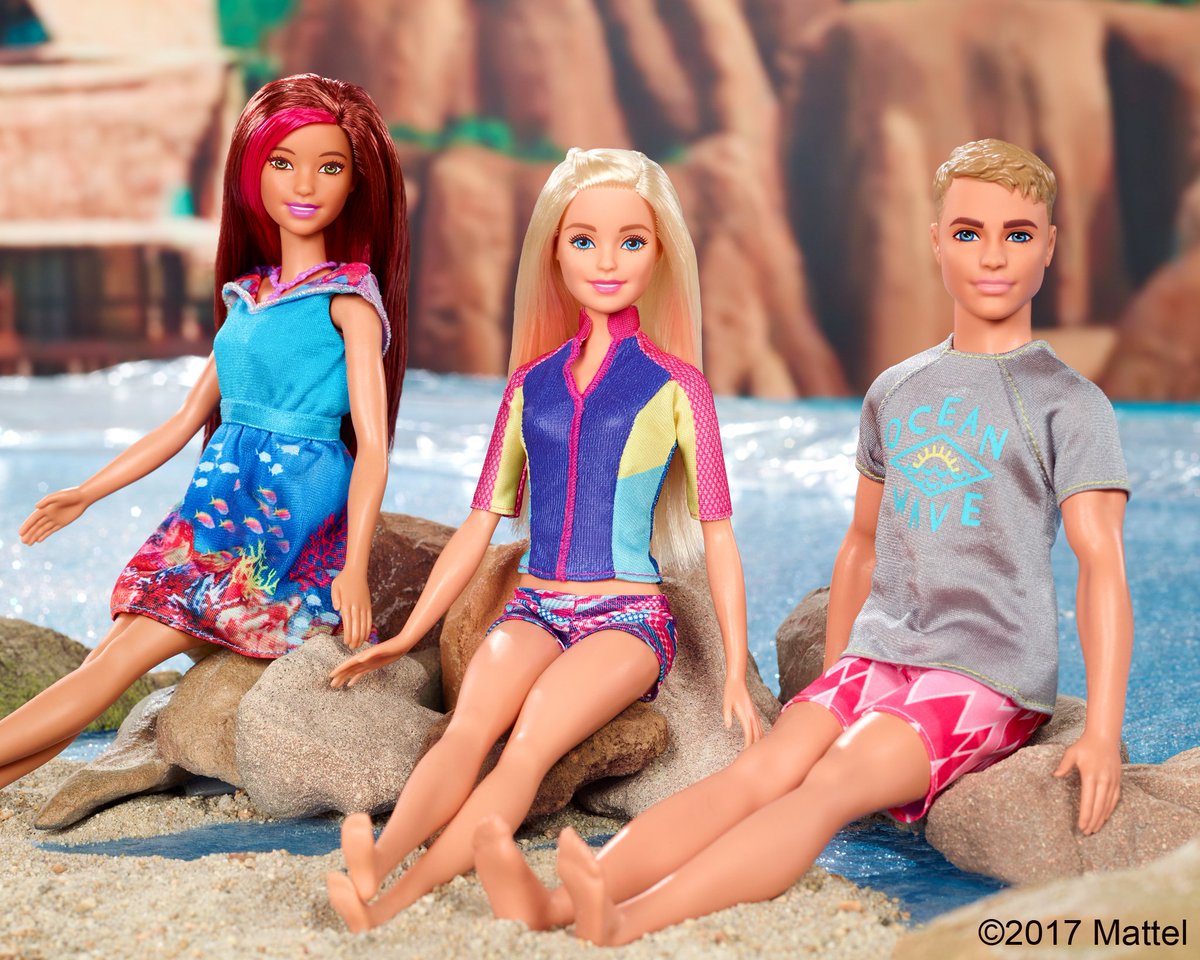 -I read that Barbie Dolphin Magic was a special for Dreamhouse Adventures? If so, will there be an connection or references to their holiday on the island? Will Ken mention his internship?

-How many episodes will there be? If the series does well, will a second season be released? I feel like there will only be three or four episodes as the trailer seemed to show the same scenes over and over again.

-Will there be special dolls or playlets released to match the series? If so, we should have seen leaked images by now…

-Is there further videos coming? For example, ‘meet the characters’ or ‘music videos.’

-Why is this series exclusive to Netflix? Barbie: Life in the Dreamhouse did so well on YouTube as it was available for everyone! I’m sure it will get leaked to YouTube eventually, but until then, it seems strange to have something ‘exclusive,’ particularly when their target audience is preteens.

Alright, that’s it! Can you believe I managed to write 1500+ words analysing a trailer?? Goodness me, imagine when it actually releases! What are your thoughts? Are you as excited as I am?