It’s quite funny to go through my old posts and see how I have changed. Today I was going through 12DP Edeline and The Squad Moves In and I thought “whoa, this seems like ages ago! Look at how bad the photos are!”

They really are quite bad. Back in 2015, I didn’t have a smartphone so I just took photos with my iPad. This meant they were really grainy! I also took them from inside my bookshelf. This was a great idea at first, because there were lots of “floors,” but it quickly proved to be a waste of time because the lighting was so bad!

In this photostory, Barbie, Imogen, and some other dolls, had just moved into their new apartment. Barbie had told Imogen to go buy some “essential” items, such as toilet paper and microwave meals.

And this is what she came back with! A television! Haha. I still think this photostory is rather funny, but as you can see, I didn’t put a whole lot of effort into setting up the scene, and it’s very dark.

Here is a photoshoot from the same post. It’s all the roommates together; Barbie, Neko, Grace and Imogen. They were “the squad.” 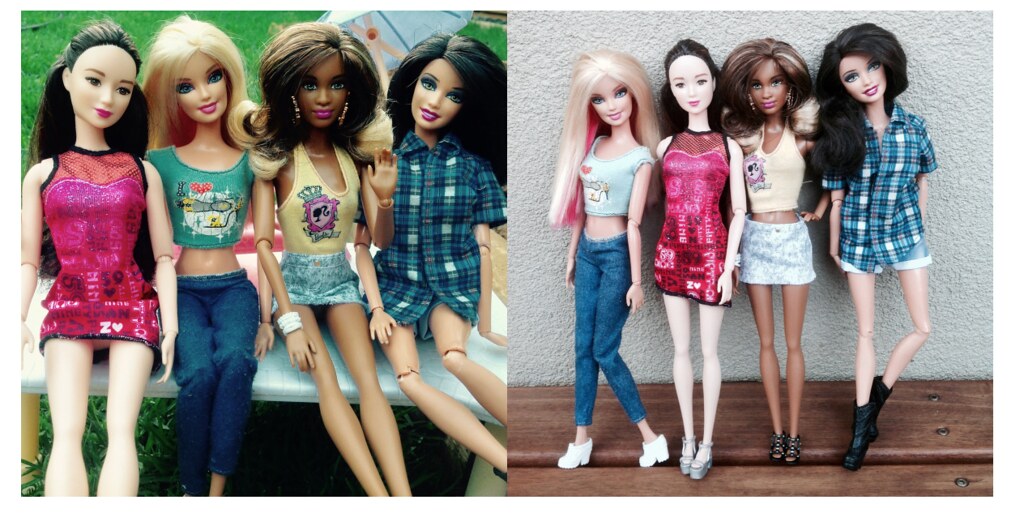 I remember this photoshoot took me ages to do. I think it would have been much better if all the dolls were looking at the camera!

This next set of photos is from The Audition, a photostory where Zoey builds her own dance studio. My dolls come in for an audition, although nobody ever finds out if they make the team because I destroyed the studio a few weeks later! (Oops!)

This is the lobby area. I built the studio so you could easily change it around. The top part was meant to be the “second floor,” although nobody ever went up there.

And this was the dance studio -see the chopstick on the wall? That was supposed to be the barre. I bought the mirror at a market for $2. The lady looked at me like “what do you want this for?” I think it had broken off some furniture.

It was pretty dark in the dance studio! I prefer to make open dioramas nowadays, instead of boxes like I did back then.

This next post is from 2016 again, but a bit later on in the year. It’s about my Fashionista Cutie 2011 Fashion Pack. I was still using an iPad to take all my pictures.

I like the styling -all the girls look really cute! However, once again, it would be nice if they were all looking at the camera!

This is my favourite photo in the shoot. If I was going to recreate this, I would probably do it outside where the lighting is better (although to be fair, I was standing in front of a huge window to take these photos).

This next post is from February 2017 -I had finally gotten my iPhone 6s, which is what I still use to take photos today. This one is called Exam Time, it was part of my “Aquifolia High” photostory series. 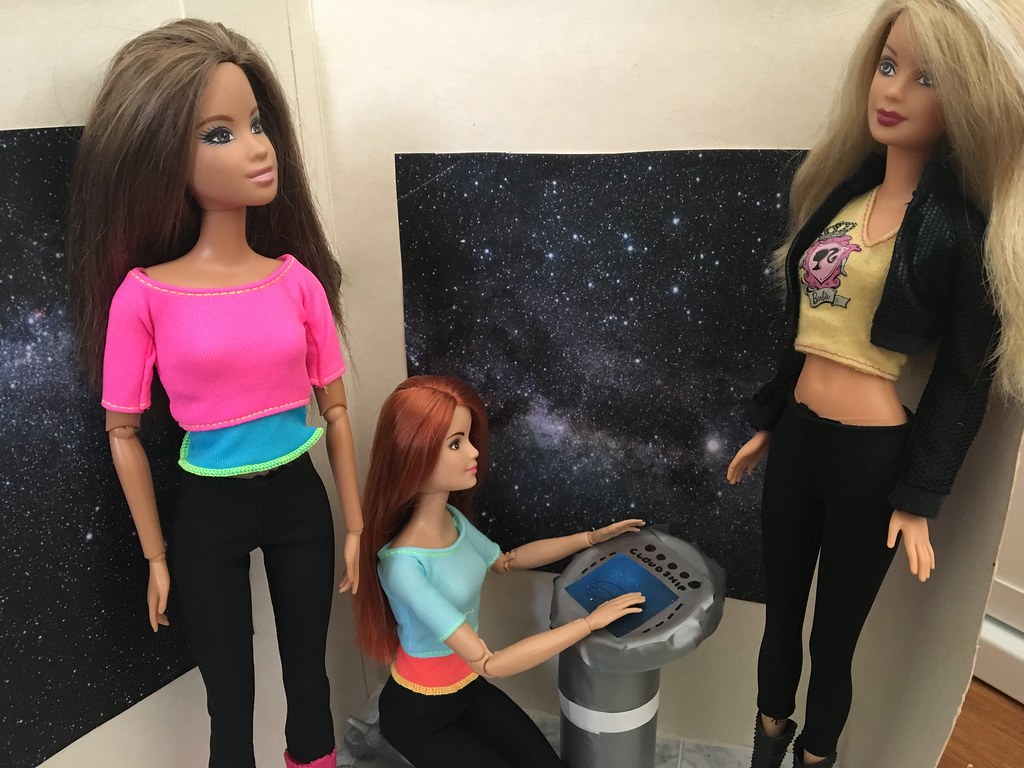 I mostly focused on the dialogue here, rather than the actual pictures. I still do this too much! I think the set looks a bit “cheap” and “rushed” (even though in reality, it did take my hours to glue everything on!), and for goodness sake, I could have cropped the background out!

If I was to do this again, I would move the doll’s heads down slightly. It looks like they’re staring at the ceiling! 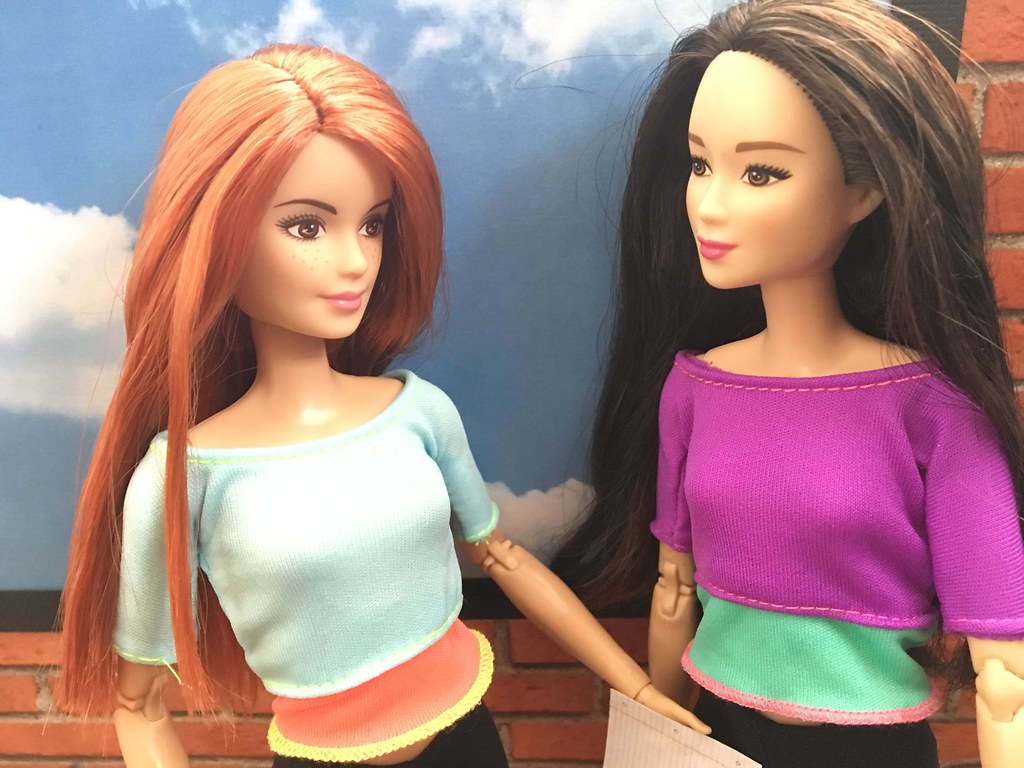 This is my favourite image from that day! I love how the light is shining on the dolls, and they look like they are having a serious conversation. In this scene, Aimee is annoyed she has gotten a low grade on her exam, and Neko is comforting her.

I think my blog has definitely improved over the years, and I am much better at taking photos. Here are some examples of something more recent. 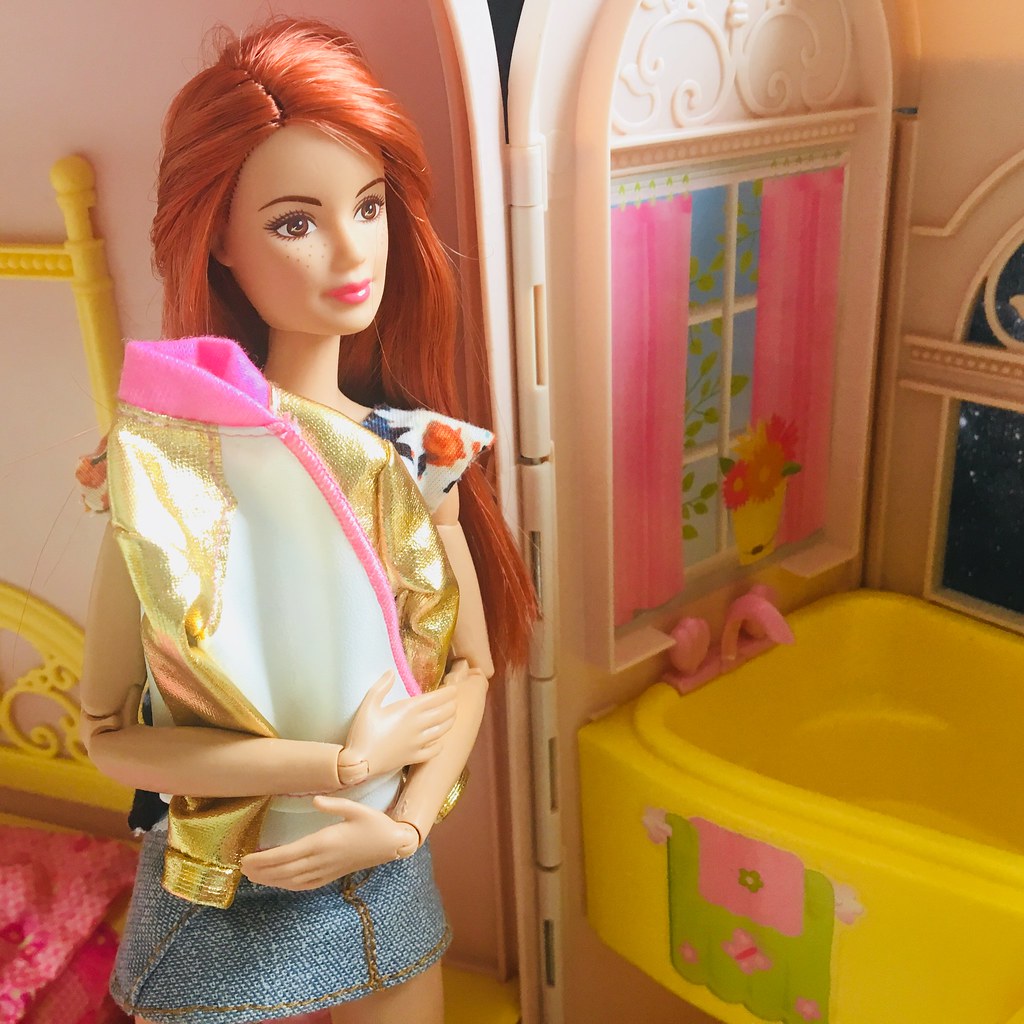 This one is from The Jacket, from my Neko vs Planet Fashion series. I like how soft Aimee’s face looks here. I took this in late 2017. 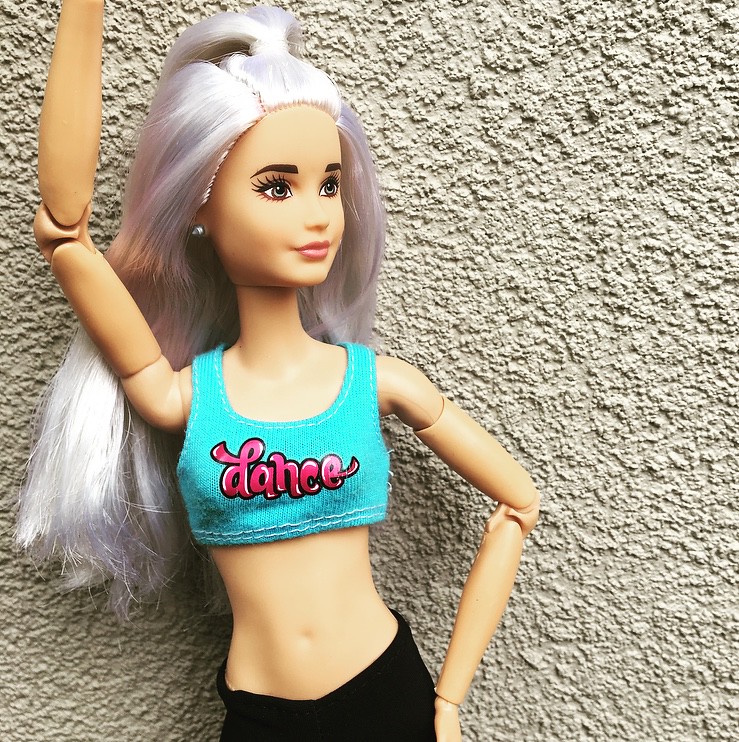 This one is also from early 2018, it’s from my Fashion Challenge: Pink Legwarmers post. 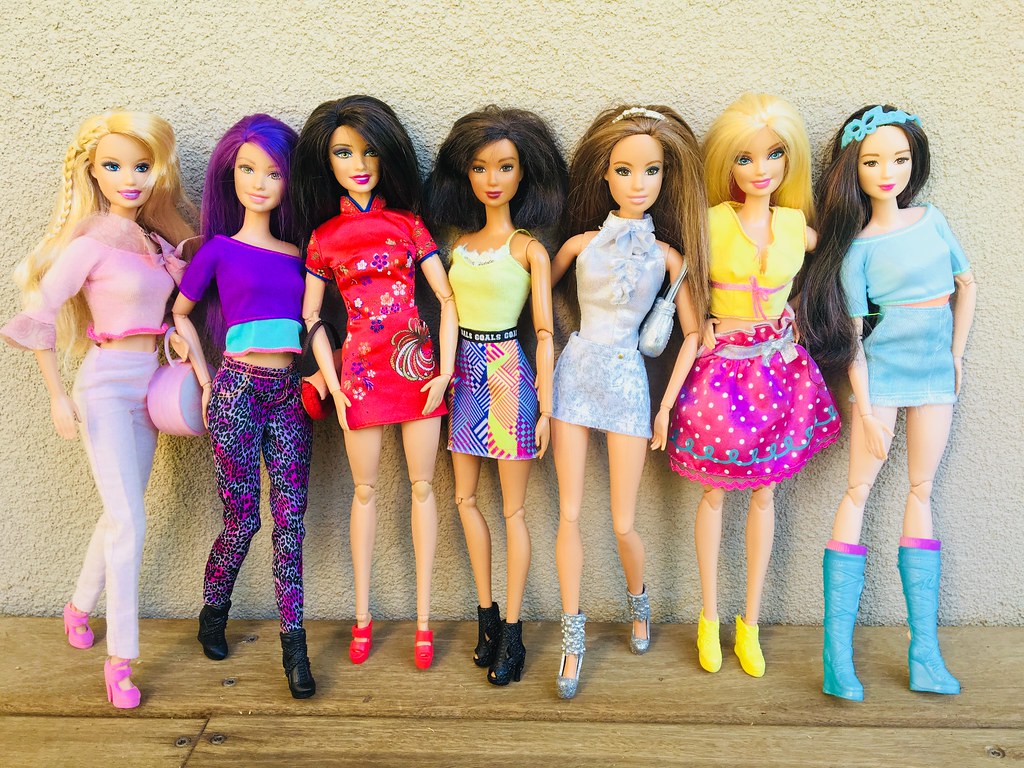 All The Colours of the Rainbow (Catrina, Danika, Imogen, Kayla, Emily, Barbie, Neko)

FWI: I’m not saying my photography skills are all that amazing now, because I know they’re obviously not, I’m just saying that I have improved from when I first started.

I started my blog back in 2015. That doesn’t sound like *that* long ago, but that means I’ve been taking pictures over and over, week after week, for more than three years! In addition, I’ve also taken lots of photos for Instagram that I’ve never featured on here.

In order to improve in something, you have to do it consistently, over and over again.

2.) Invest in a Better Camera

When I made the switch from my iPod to my iPad, I found there was a huge change in the quality of my pictures. I don’t think I have any pictures from back then, but let me tell you, they were so incredibly grainy! There wasn’t a way to focus at all.

When I made the next switch, from my iPad to my iPhone, I noticed a big change once again. I will probably upgrade to a new phone in 2019, so hopefully I will get a nice new shiny camera once again. The quality of the iPhone X looks amazing, I love all the different modes.

3.) Keep Your Dolls Looking Down

When we look at our dolls in real life, we generally have their faces pointing straight ahead. However, your photos instantly improve if you point their faces down, as far as they will go.

See here? In the first image, Skipper looks perfectly natural in real life, but she looks silly in the photo. In the second image, I pointed her face all the way down. It looks much better!

There are three drawbacks to adding filters.

One, it looks obviously unnatural and lowers the quality of your images. A once focused image now looks grainy, especially when you zoom in.

Two, it’s more work. You have to add the filters to each photo individually, screenshot them, crop them and then finally upload. It’s a lot of work!

Three, you won’t ever be able to stop! Adding a filter is really addicting once you realise how much better your photos look! See here, how Skipper looks instantly bright and fresh? That’s the filter for you! (it’s Instagram’s Claredon, in case you were wondering, which is my favourite)

5.) Stop Your Dolls From Looking Around

When taking a photo, you have to carefully position your doll’s eyes so they are looking directly at the camera lens, or at least in the same direction as each other. Unless, of course, you want to pose them “naturally,” for example, if they are having a conversation or doing an activity.

6.) Check Every Photo Before You Move Onto the Next (Even if You Think It’s Fine!)

You know what’s really annoying? When you’re taking lots of photos of your dolls doing different things (for example, for a photostory) and you don’t realise that one crucial photo is a bit blurry. Then, when it comes to write up the photostory, that one photo is blurry and the story won’t make sense if you don’t include it.

To combat this, I make sure that I check every photo before changing my dolls position. Sometimes a photo will look completely fine from the viewfinder, but later I discover that it isn’t very good at all. What a bother!

What are your top tips for improving your doll photography?