Hello everyone! How has your day been?? Today I was supposed to be productive, but I was ill so I spent most of the day sleeping. Oops! I did manage to quickly go to Kmart though, and I stopped by the pink aisle to have a look at the new Barbie products. 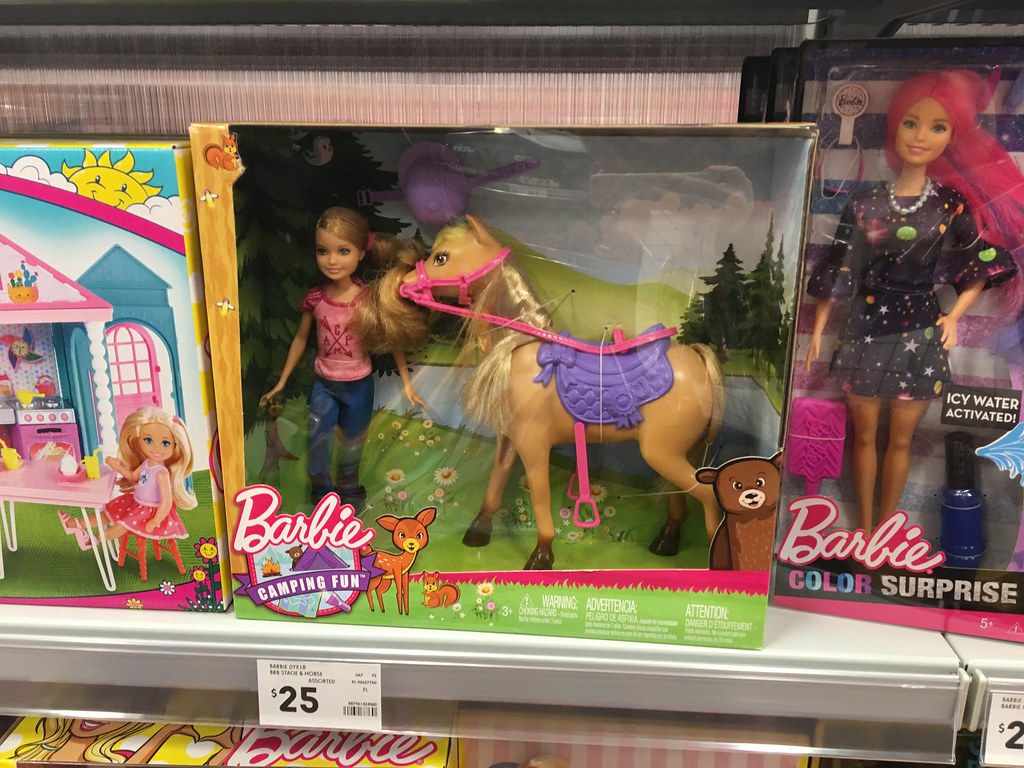 Seeing this product was probably the biggest surprise for me! I haven’t been keeping up with the latest Barbie rumours and promotional images, so I hadn’t seen this playset online before. But look how cute it is! $25 is a good deal for both a Stacie doll and a horse!

I personally don’t have room for another horse, but this playset is really cool and I would definitely pick it up if I had the space. I only wish that the saddle was removable, and it came with other accessories to make it more realistic. The helmet is a nice touch though! 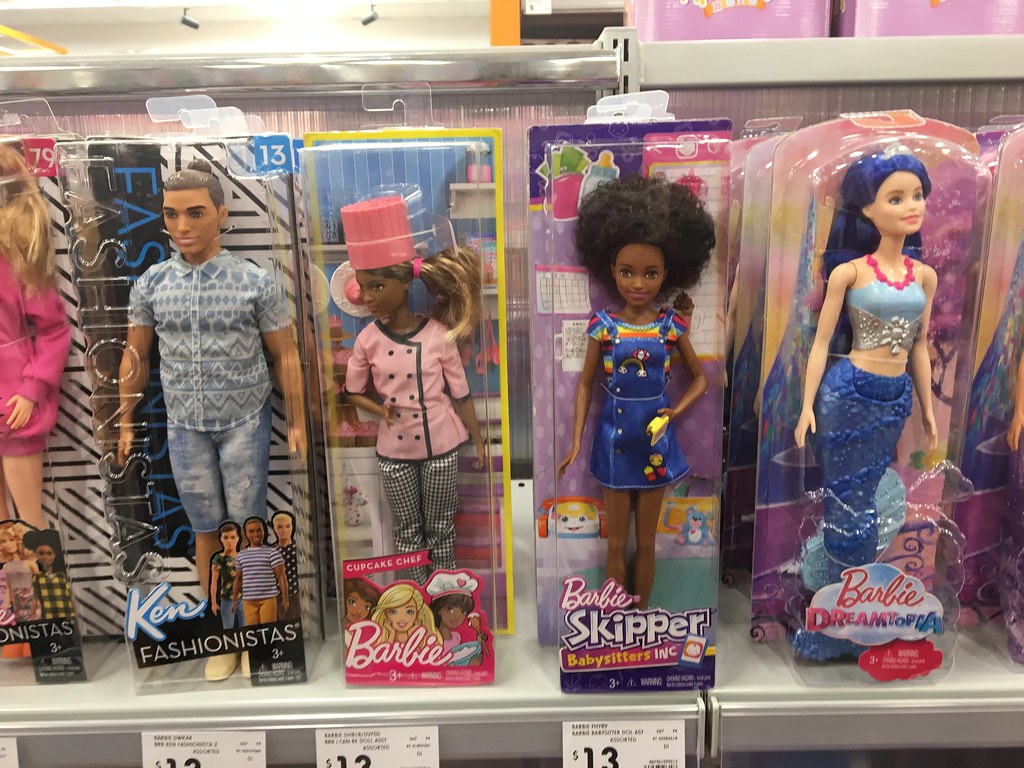 Over here, I saw the new Skipper Babysitters Inc doll! I haven’t seen this girl IRL before, and honestly, if I saw her six months ago, I would have grabbed her straight away! But now the hype over these dolls has died down, and I feel like I wouldn’t actually use this doll that much.

I mean, I haven’t even used my other Skipper Babysitters dolls yet, have I? 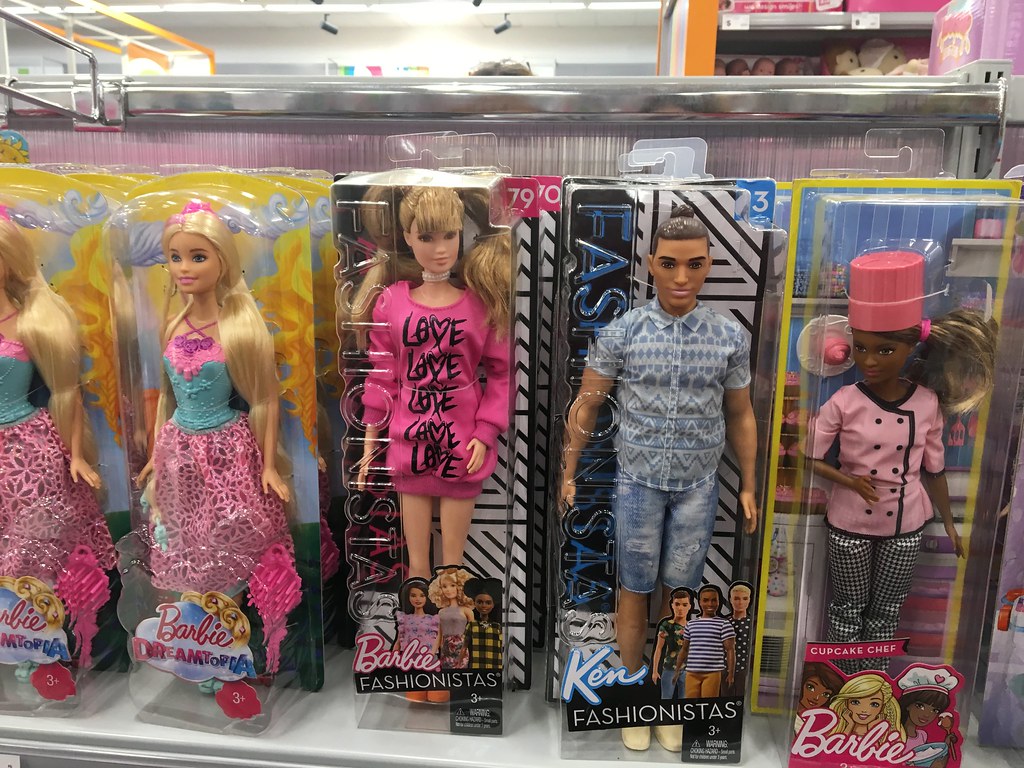 Coming over to the left, we have the new Fashionistas! I haven’t seen any Fashionista dolls in store for awhile, I think they have stopped selling them at Target and Big W, so Kmart is really my only option.

Anyway! I have seen the Man Bun Ken many times before, and I’m not really interested in him, but the new girl (with the pigtails) really caught my attention! She’s such a cutie, and I love her bright pink dress! Unfortunately again, I don’t really have room for another doll -especially an unarticulated one! She is nice though. 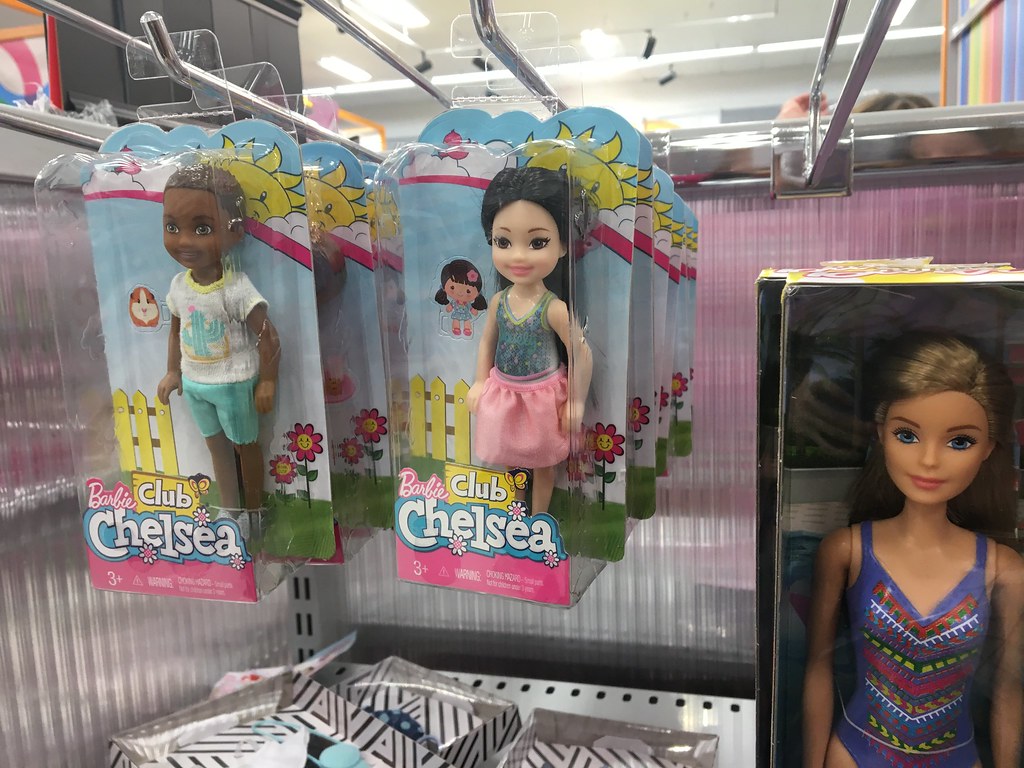 On the end of the shelf, we have the new AA Club Chelsea boy. He has such a nice face! I regret not picking this boy up -he may be useful in future photostories. I think the Club Chelsea dolls were $9, so not a bad price. Maybe next time! 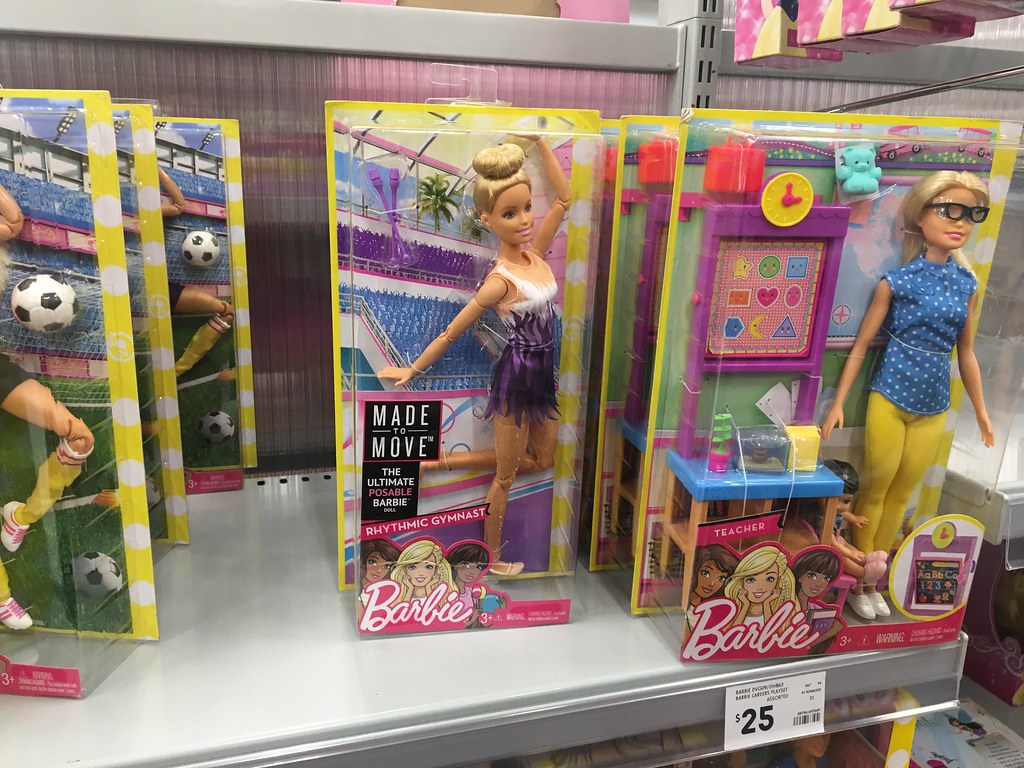 Over here, we have the Made to Move Gymnast, Soccer Player and Careers Teacher doll. It’s frustrating -the Made to Move dolls have been $19 for the last two years! I just want the soccer player doll, for goodness sake! I am starting to feel like the price will never go down.

I remember when the first wave of MTM dolls was released, and they were $27 each. I bought so many at that price, and of course I regretted it later when they all went on clearance. So I suppose it could be worse! 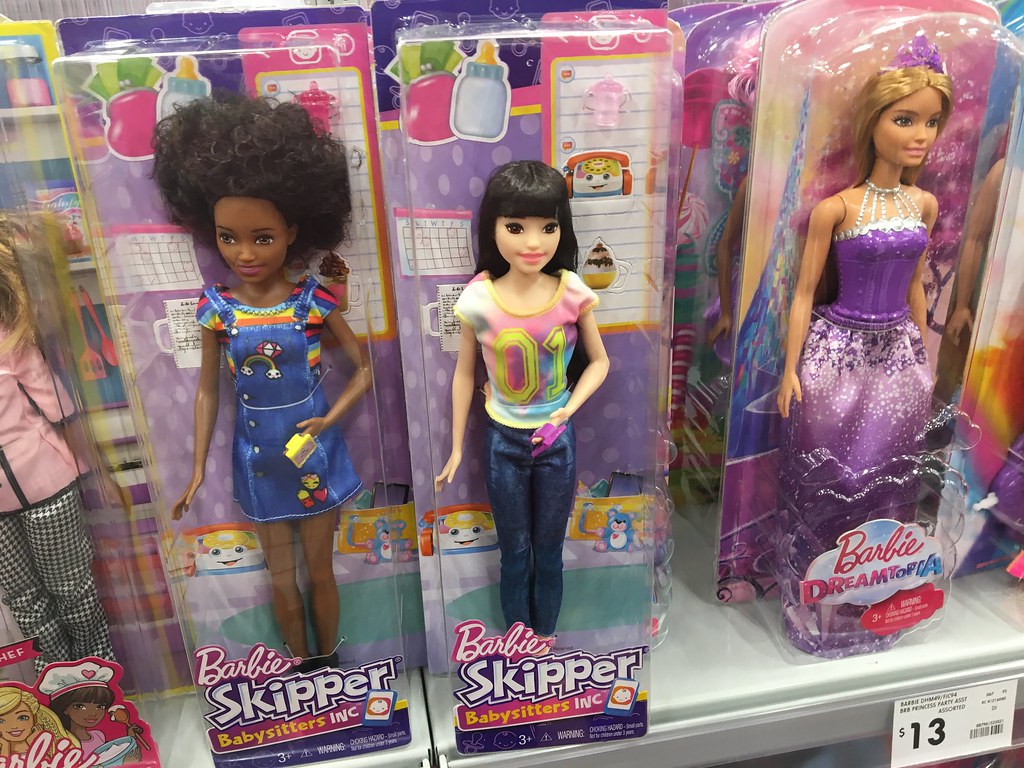 I was about to leave the store when I decided to check behind the AA Skipper Babysitters Inc Doll. Usually they just have the same doll repeated all the way down the shelf (or just one at the front, to make it look more stocked than it actually is), but I found another new girl as well!

This one is again really cute, I think her face is really sweet and it’s awesome that Skipper has such a variety of friends. But again, I shouldn’t buy so many dolls! I don’t need another one.

It would be nice if they gave the Babysitter dolls names and personalities -it would be cool if it said something on the back like ‘Hi! I’m Anne! I love sports! I’m a soccer coach to elementary school children!’ Just a simple biography, y’know? 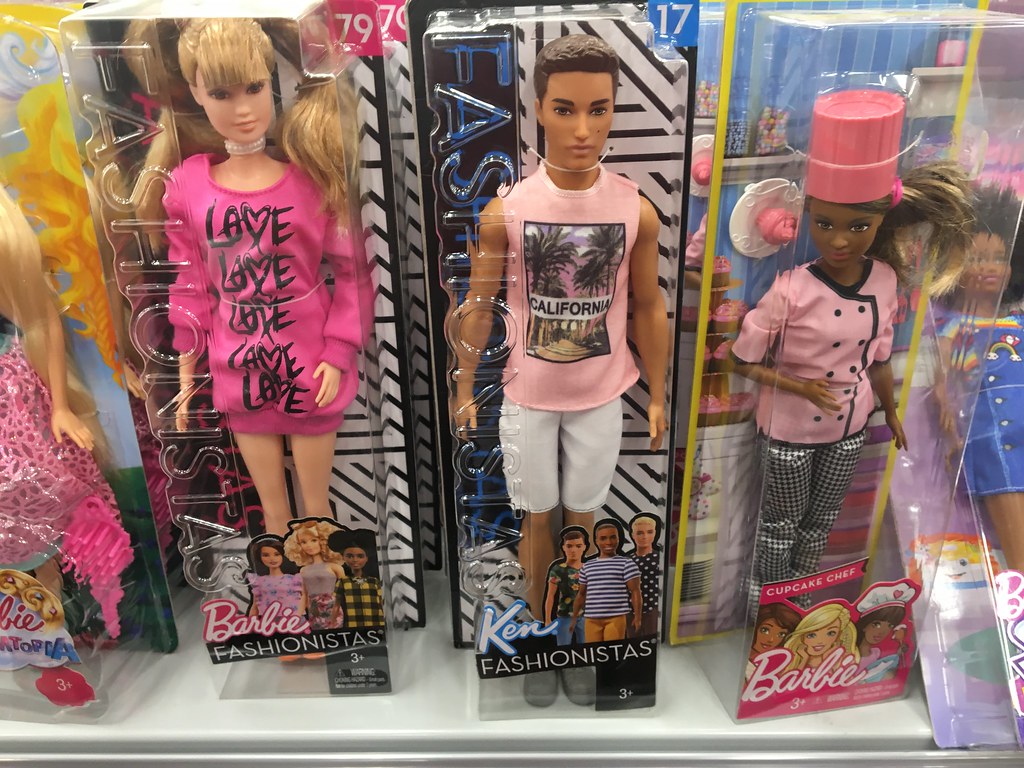 I had a quick look behind the Man Bun Ken and spotted yet another new Fashionista! I saw the promotional images for this guy ages ago (I think he was released in 2017), but I have never seen him in real life. I like his outfit! It’s nice to see something a bit different. I’m sure my other Ken dolls would appreciate it if I bought this doll; if only so they could borrow his clothes!

However, his face seems a bit “angry” and his hair is plastic and YUCK. I am definitely not a fan of moulded hair! Why, oh why, can’t we have nice Ken dolls like the ones that are shown on the @BarbieStyle Instagram account?

I’d also like that jacket. And that table. Actually -everything in this photo please.

Expect for Ms Honey. Look at those eyes! I’m not sure what is going on with that poor dog -perhaps she’s sick of being dragged around with Barbie all day? Haha.